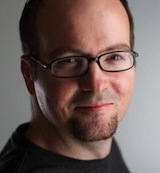 Kevin has an Associate of Arts in 3D Animation and a Bachelor of Arts in Media Arts. With almost ten years graphic and digital art experience, his work can be seen in such publications as X-men and GI Joe comics; and his children's book Hergbert: The Not So Scary Monster is available online.

In his exploration of his art form, Kevin has gone beyond the static page taking his art into new media working on the Teenage Mutant Ninja Turtles video game for Rainbow Studios and developing music videos for bands such as Audra, Imachine, and Idle Red.

Noted for is innovative use of visuals, Kevin has directed multiple films, commercials, and music videos including the award winning feature film, Malediction (2007).

Grief is a feature near and dear to Kevin's heart and cant wait to put this film on its feet.